When I saw that The Smokers Club was bringing B-Real, Redman and Method Man, to stages all across America, I knew I was going to have to catch the World Wide Rollers Tour live. The tour started in October, in Providence, RI, & wrapped up in New York City tonight. Initially, the dates & locations didn’t look like they were going to work with my schedule, but, during the last few weeks, I was able to attend the show twice, coast to coast – once in Los Angeles and once in Philadelphia.
The first night was totally unplanned and unexpected, and it ended up being so much fun. I was invited out by my new friend (and favorite female rapper) Snow Tha Product. You met Snow when I mentioned her in my post about Soundset. I met up with her & some “Wokes” (her crew) and after some shots of Don Julio 1942 (Don “July,” as Snow calls it), we packed in the car (like some true Mexicans), put on some Banda Music and hit the famous Sunset Strip to catch the show at House of Blues, Los Angeles. 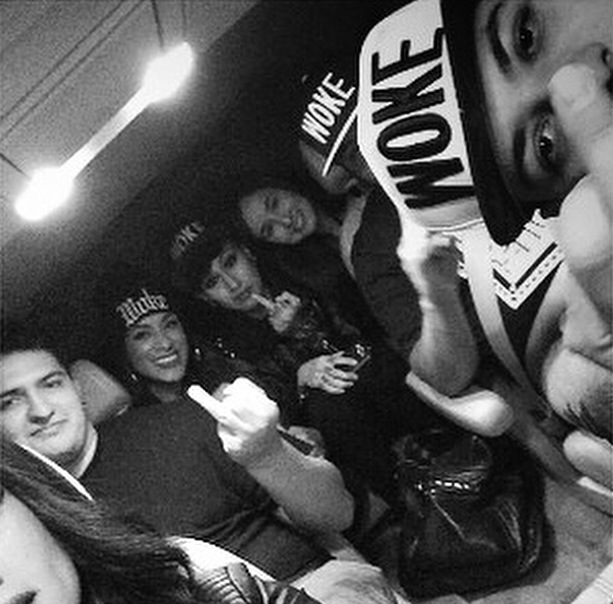 There were definitely some notable faces in the crowd, including Southern CA’s very own Ras Kass. I mean, what can I say? It is Hollywood, baby.
We got to our place on the balcony, with a perfect view of the stage, just in time to catch B-Real’s set. Dr. Greenthumb did a great job of entertaining this (often labeled as) “too cool for school” Angeleno audience… This is his home, after all. Fellow locals enjoyed the performance of classics from the rather extensive Cypress Hill catalogue. B was dressed in his signature black attire and a throwback Los Angeles Raiders cap. It was a quintessential West Coast experience. 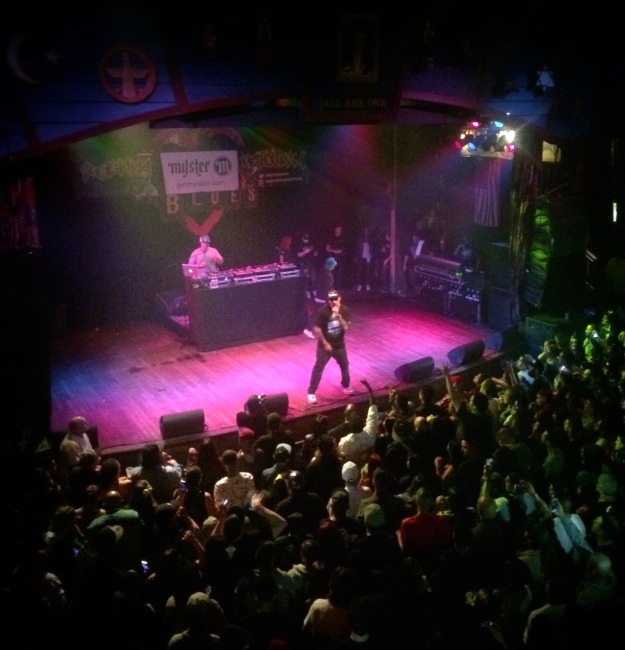 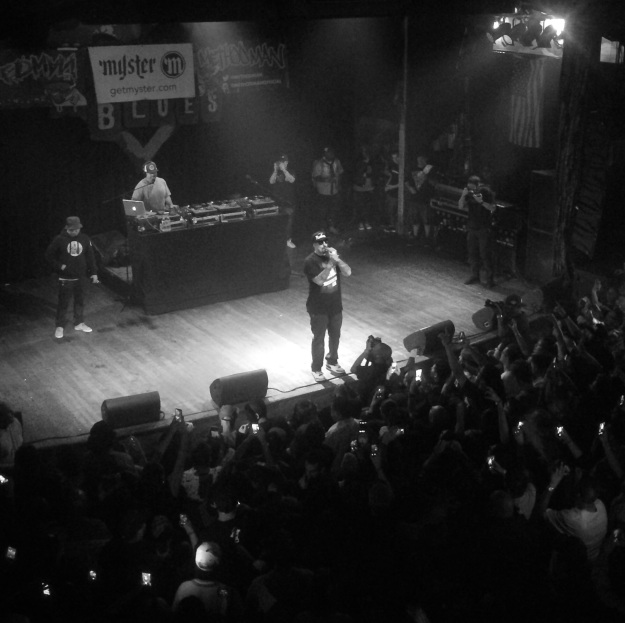 After smoking out with their favorite, famous “stoner” to hits like Hits From The Bong and Roll It Up, Light It Up, the crowd goes a littleInsane In The Brain. My favorite part of the show was when B-Real played on the Ice Cube beef by incorporating Cube’s “stolen” version of Throw Your Set In The Air, which we all know as “Friday.” 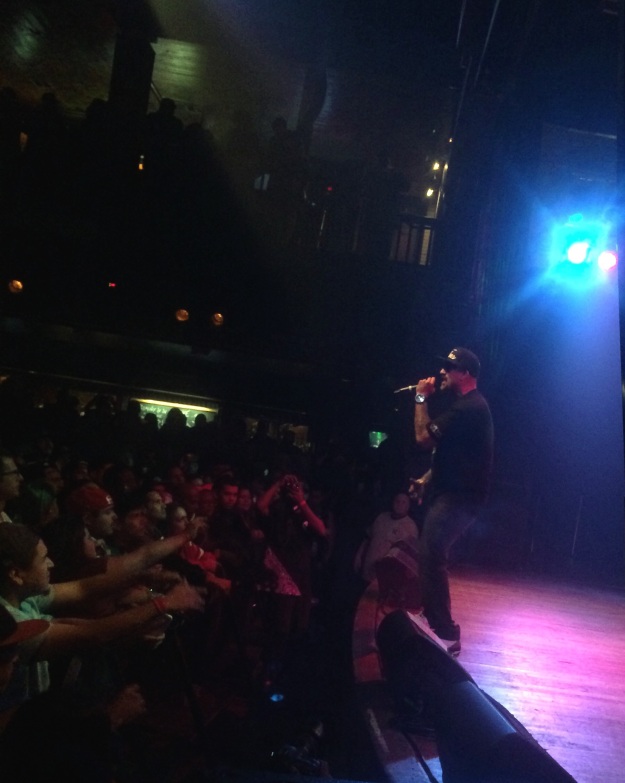 Soon it’s time for Red ‘n Meth to take the stage. These guys have always been such charismatic performers. They’re so playful & fun to watch. You can tell they really enjoy sharing the spotlight with one another. I’ve seen the guys live several times over many years & I’m thoroughly entertained each time. Their friendship and camaraderie makes for a great show. 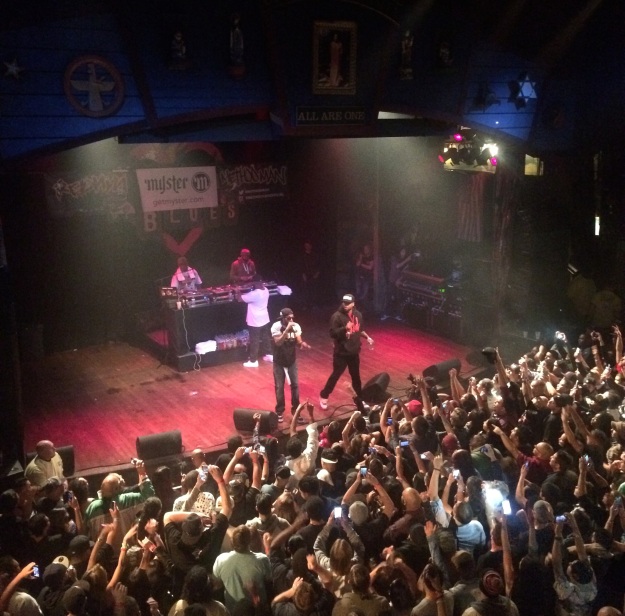 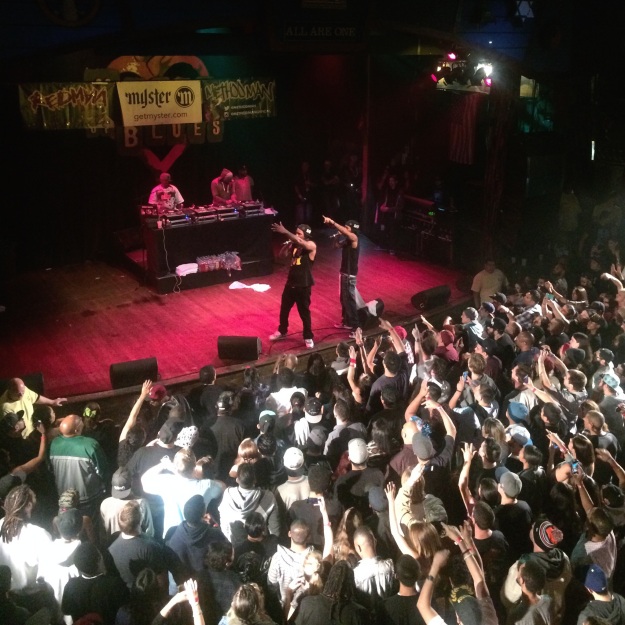 Redman is sporting a white terry-cloth belt from his hotel bathrobe. He explains that his belt broke, so he had to make due. Fans love it. It’s reminiscent of his MTV cribs episode from 2001… He’s still humble and simple… Nothing fancy.
Method Man lets it be known that he’s only going to give as much energy as he receives. This, of course, ignites constant crowd participation. The guys make sure to keep the vibe hype by jumping off the stage and into the crowd all throughout the show. It was a great night for hip hop fans. 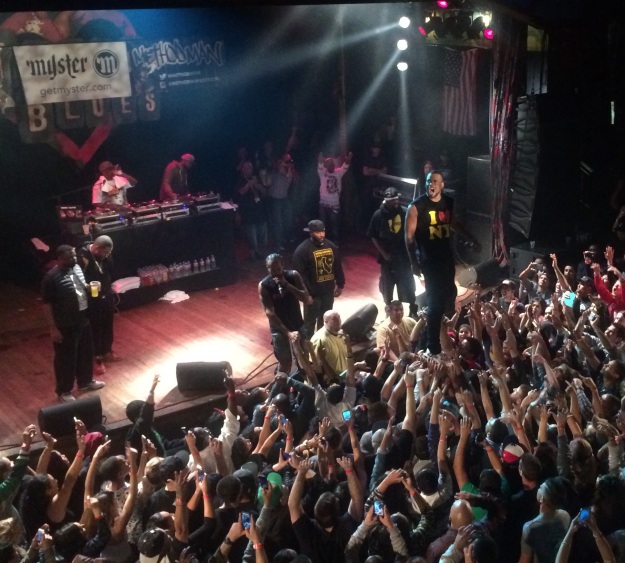 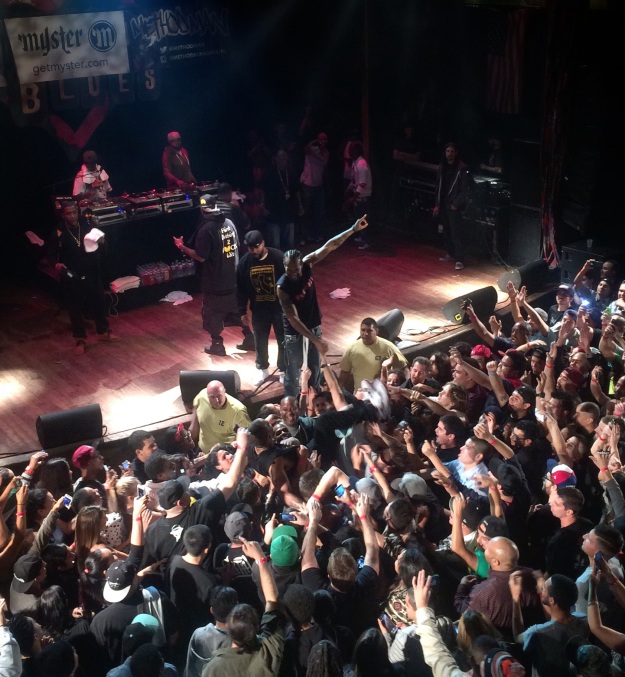 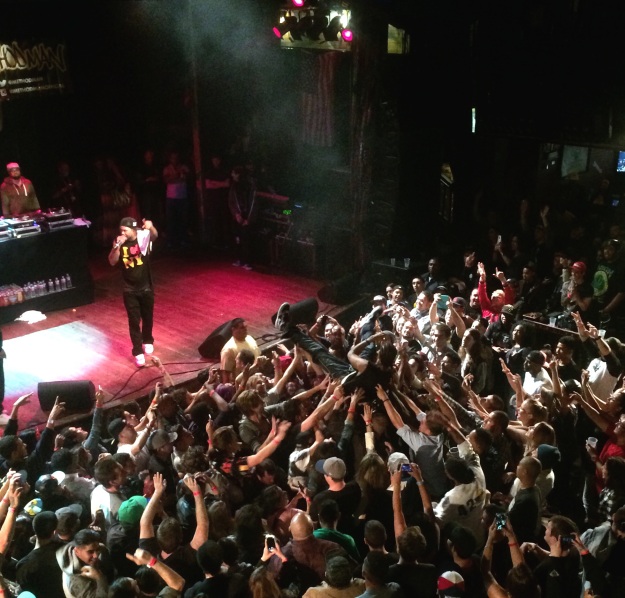 Before heading out, I got the chance to meet Laura, from B-Real.tv. She spotted the Woke gear and wanted to say hi to Snow. After chatting for a bit, I reached out to her about writing a piece for the show… a comparison piece on West Coast & East Coast, and thanks to her, I got to see the sold out show in Philadelphia last night…
When I arrived to the Theatre of Living Arts, the sidewalk was packed with people trying to get into the show. Apparently the box office had closed down after issuing a set of tickets to a large group. A long line of people who had already purchased their tickets via will call were now waiting for adjustments to be made because of maximum occupancy issues. It was not pretty…
I’m nervous, because I think I’m going to be late for B-Real’s set… Some nice girls let me hop to the front of the line and after about 30 minutes, the window opens again. After some “technical difficulties,” I’m finally issued a pass & I make it in in time to catch a few songs. Just like the fans at the LA show, Philadelphia seems to love B-Real’s performance. As I make my way through the crowd, I’m surrounded by people rapping along, bobbing their heads, and…”partaking.” 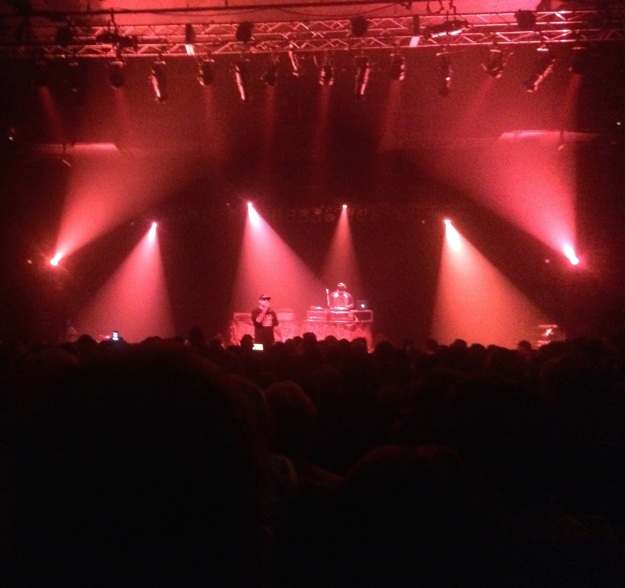 The vibe on the East Coast is definitely a little different than the one back home, but it’s still all love. B-Real ends the show with his signature on-stage snapshot and says good night to the City of Brotherly Love. 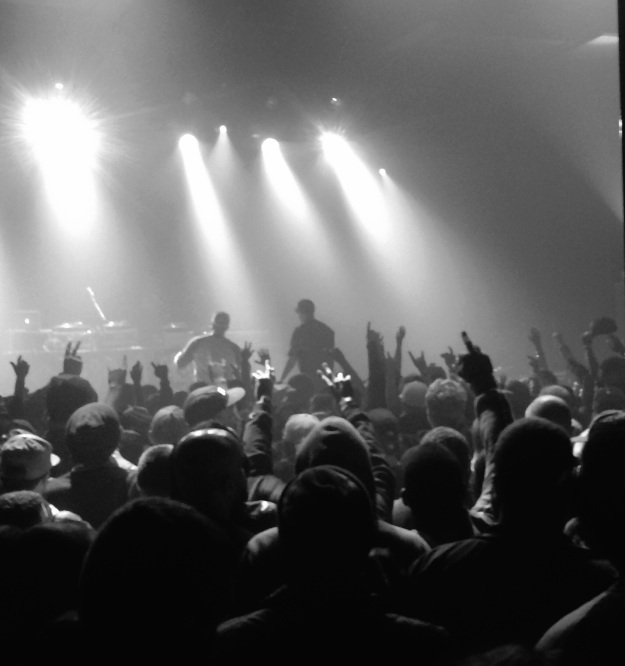 By the time Red and Meth take the stage, I finally get access to media areas and can enjoy the show from backstage. The guys stick to the same motto when it comes to energy: We’ll give you what you give us… So, when presented with the terms, the crowd gets louder & hands go in the air. Despite the complaints from Method Man himself, about the volume levels, the audience seems totally into every song. The guys are jumping off stage again and Method Man admits to hurting himself… But that doesn’t stop him from crowd surfing. These guys are truly committed to putting on a great show… 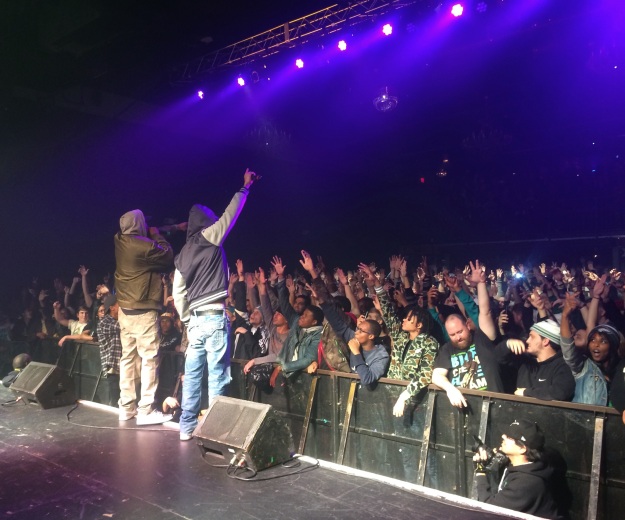 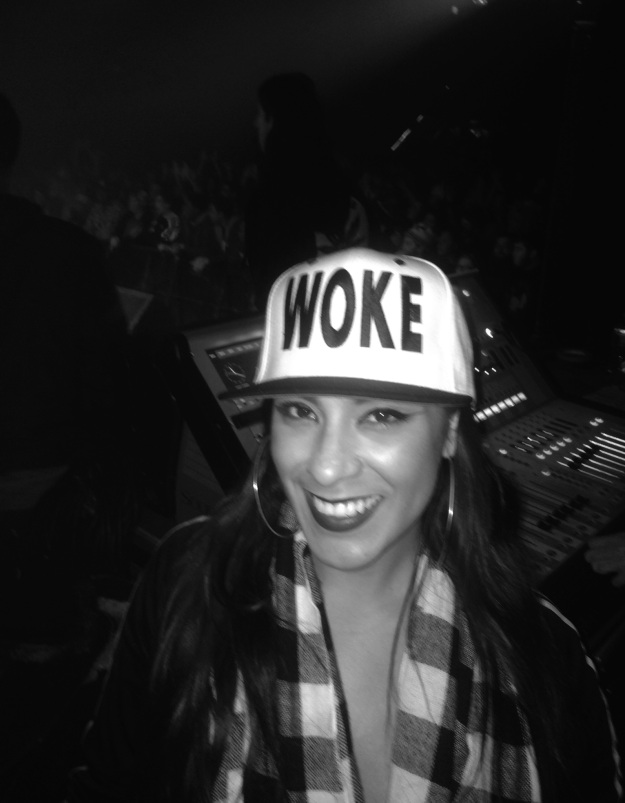 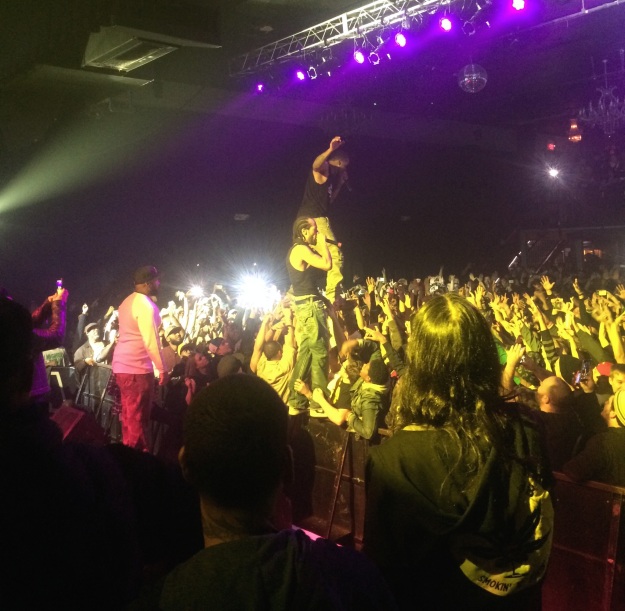 In closing, they unite the crowd by asking everyone to throw up a “W” with their hands. They get everyone involved, even photographers and sound men. They do a tribute to Ol’ Dirty Bastard, fallen member of the Wu-Tang Clan and continue by remembering other legends like Biggie, 2Pac, Dilla, etc. Then, they share a powerful moment with us when they mention Mike Brown & where they stand. They ask everyone to put a “peace sign” in the air & when everyone holds up the well-known “V,” they ask for us to move our two fingers together, to close the gap & represent unity, without separation. Talk about moving the crowd… The guys said good night to Philadelphia and asked them to go out and make a difference in their communities, to be aware, to be smart & to overcome the concept of “us against them.” 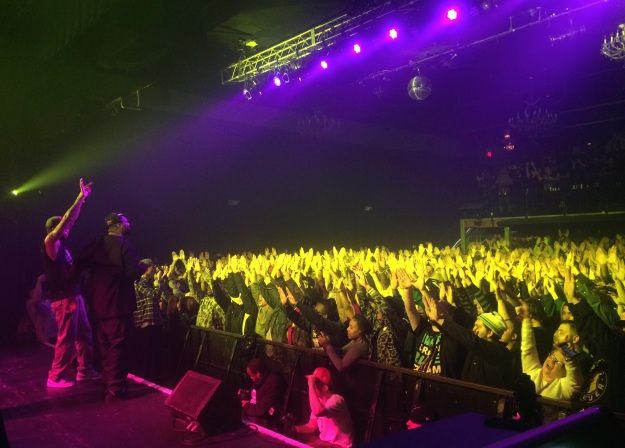 I’m not sure how tonight’s show went in New York, but I’m sure the guys went out on a powerful note, sending everyone into the holiday season with love.
If you were lucky enough to catch the guys on this tour, I hope you enjoyed it as much as I did.

Special thanks to Laura from B-Real.tv for allowing me access to the show last night & for introducing me to Aaron Cohen‘s music. Aaron joined the guys in New York tonight to close out the tour and to promote his new album “You Wouldn’t Know,” set to release on December 2, 2014. This guy has been working hard… He has 3 mixtapes under his belt, he’s toured around the world and with artists like Redman, Method Man, B-Real, Berner, Madchild, & Slaine. He’s gotten recognition with The Source Cypher , Mass Appeal , Sway in the Morning, and he’s performed at shows like SXSW. Aaron has surrounded himself with greatness. So, expect nothing less from him in the near future. You can pre-order the album here. 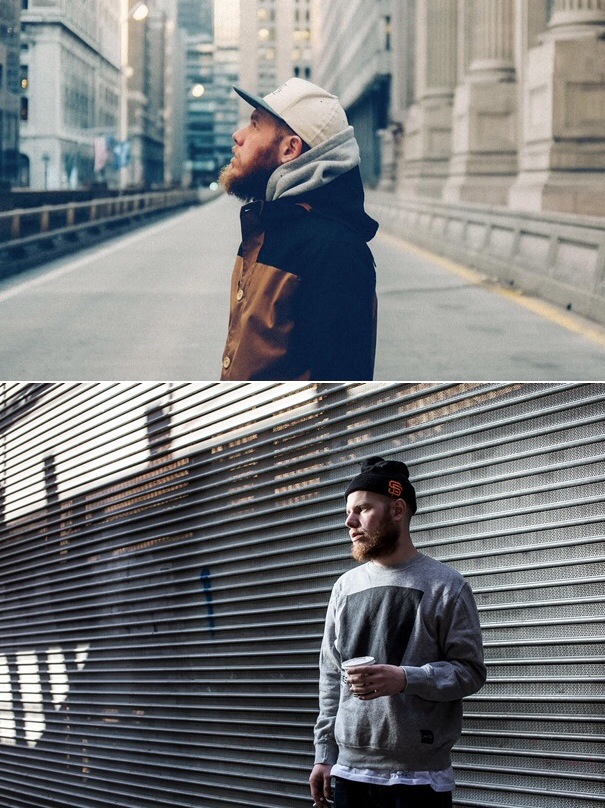 *Links for the other artists mentioned in this post are included throughout in the details above. Thank you all for reading & following along…

Have a Happy Thanksgiving and a wonderful Holiday Season!